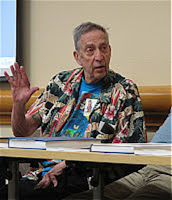 Richard Allen Lupoff was born February 21, 1935 in New York. He met Pat on a blind date in 1957, and they were married the following year. The Lupoffs were active in comics and SF fandom starting in the 1960s, hosting meetings of the (Second) Futurian Society in Manhattan and helping to found the Fanoclasts. Before becoming a full-time writer in 1970 he worked in the computer industry, including for IBM. The Lupoffs soon settled in Northern California.

A series of Lupoff’s articles on comics from Xero became the basis for essay collection All in Color for a Dime (1970, co-edited with Don Thompson). The Best of Xero, with Pat Lupoff, appeared in 2004 and was a finalist for the Best Related Book Hugo Award.

Lupoff’s debut novel was SF adventure One Million Centuries (1967). He published numerous novels in the ‘70s, including Sacred Locomotive Flies (1971), Nebula Award finalist Sword of the Demon (1977), The Triune Man (1976), The Crack in the Sky (1976; as Fool’s Hill, 1978), Sandworld (1976), Lisa Kane (1976), and Space War Blues (1978), the latter expanding his Nebula Award-nominated story “With the Bentfin Boomer Boys on Little Old New Alabama” from Again, Dangerous Visions (1972). Into the Aether (1974) was adapted as comic The Adventures of Professor Thintwhistle and His Incredible Aether Flyer with Steve Stiles for Heavy Metal in 1980, collected in 1991.

Lupoff was an expert on the work of Edgar Rice Burroughs, helping to bring his work back into print in the ‘60s and writing about him extensively. He also wrote Buck Rogers tie-ins under the name Addison E. Steele. He contributed novels to Philip José Farmer’s shared world project The Dungeon and to Daniel Pinkwater’s Melvinge of the Metaverse series. His non-fiction includes The Reader’s Guide to Barsoom and Amtor (1963), Edgar Rice Burroughs: Master of Adventure (1965), Barsoom: Edgar Rice Burroughs and the Martian Vision (1976), essay collection Writer at Large (1998), autobiographies Writer, Volume 1 (2014) and Writer, Volume 2 (2014), Where Memory Hides: A Writer’s Life (2016), Writer, Volume Three (2016), and Writer, Volume Four (2020).

He edited numerous collections and anthologies, including The Comic-Book Book (1973, with Don Thompson, expanded 1998), What If? #1: Stories that Should Have Won the Hugo (1980) and two additional volumes in 1981, and The Two-Timers (1981, with Fender Tucker). He co-hosted literary-focused radio show Probabilities in Berkeley CA from 1977 to 1995, when it was renamed Cover to Cover; he left the show in 2001.