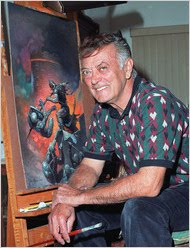 Mystery, adventure, and fantasy readers will remember his book covers, where his signature images were of  fierce, hard-bodied heroes and bosomy damsels in distress. “Paperback publishers have been known to buy one of his paintings for use as a cover, then commission a writer to turn out a novel to go with it,” The New York Times reported in 1977, the same year that a collection of his drawings, The Fantastic Art of Frank Frazetta, sold more than 300,000 copies.

Read the NYT Obit HERE.
Posted by Janet Rudolph at 9:27 AM