Today I welcome Lucy Burdette (aka Roberta Isleib) with a holiday post. She is the author of 14 mysteries, including the latest in the Key West series, FATAL RESERVATIONS. KILLER TAKEOUT will be out in April 2016. Her books and stories have been short-listed for Agatha, Anthony, and Macavity awards. She's a past president of Sisters in Crime. Burdette's Death with All the Trimmings is on the Christmas Mystery List, Authors A-D.
facebook: www.facebook.com/lucyburdette
twitter: www.twitter.com/lucyburdette
pinterest: www.pinterest.com/robertaisleib
website: www.lucyburdette.com blogs: www.mysteryloverskitchen.com

Like my character Hayley Snow in the Key West mysteries, I was born and raised in New Jersey. We had sledding parties, and ice skating parties, and a real Christmas tree cut from a neighborhood farm. We served hot chocolate and sugar cookies to Santa, and carrots to Rudolph and company. There was a candlelight service on Christmas Eve and piles of presents and many relatives and a roast turkey on Christmas day.

Hayley and I are getting adjusted to Christmas in our Key West paradise. Though we miss the snow and the snappy cold air and our friends and family most of all, there’s something pretty magical about lights on a palm tree. 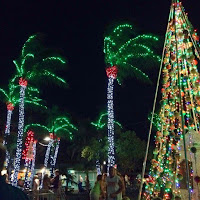 I’ll let Hayley describe one of her favorite holiday displays from DEATH WITH ALL THE TRIMMINGS (Berkley/NAL December 2014):

We stopped to admire the Christmas lights on Southard Street that had won second place in the town-wide competition. A school of blue fish flashed by, lighting up in sequence across two sides of the home. Above the faux water line—a string of blue lights—Frosty the Snowman manned a rowboat, dipping his oars into the sea over and over. And finally at the far right corner of the house, Santa reeled in one of the bright blue fish. Every inch of the property was decked out with lights, ending with a carpet of white bulbs on the sidewalk that led to the street. Snow!

As you can see, the Key West folks are pretty good at decking out their island for the holiday season. We’ll show you just a couple:

Tropical decorations on a conch house seen in Old Town: 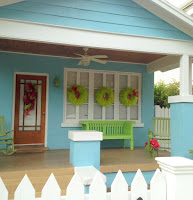 One of our favorite holiday events, the lighted boat parade.

And here’s me with Officer Joe at this year’s Hometown Holiday Parade: 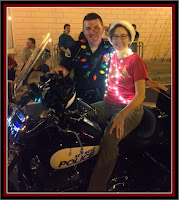 And finally when the Christmas part is over, the fun doesn’t stop. Here’s Hayley describing the New Year’s Eve Dachshund parade, and a picture of Tonka and me hamming it up with the real Officer Torrence:

Then I moved on to roughing out a story on the New Year’s Eve day Dachshund Parade, which had to be the strangest parade in Key West. Which is saying a lot, as this is a town replete with strange parades. But two city blocks undulating with dachshunds, aka wiener dogs, dressed in costumes, and other dogs dressed as hot dogs to impersonate dachshunds had to take first place. Last year, a Chihuahua flash mob gathered together through Facebook joined the procession at the last minute.
Posted by Janet Rudolph at 11:08 AM