In case you missed this, Chicago is going to be home to the American Writers Museum. This exciting project, four years in the making, has found a home on Michigan Avenue. It will open in 2017. It's just a few blocks north of the Art Institute and Millennium Park.

Malcolm O'Hagan, a retired engineer in Maryland and former docent at the Library of Congress, came up with the idea for the museum, which is modeled off the Dublin Writers Museum that has been around 25 years. There are dozens of American museums dedicated to individual writers but nothing dedicated to the entire national literary landscape: "The museum is committed to an open-ended project of including the panorama of American writing, and will embark on a long-term engagement with both the history and the future of American writing."

There will be artifacts borrowed from other museums, but much of the museum will rely on digital technology to tell the stories of authors. There will be a room dedicated to Emily Dickinson that will allow people to feel like they're in the room where she composed poetry.

I noticed that there's an area for Mysteries, Dark Tales, Western Adventures. 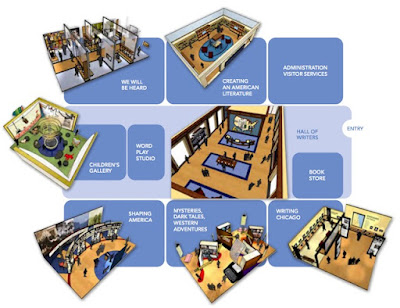 Posted by Janet Rudolph at 2:53 PM