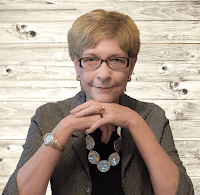 Laura Belgrave is the author of the Claudia Hershey mystery series. Her website is at www.laurabelgrave.com. Her books, in ebook format and trade paperback, are available on Amazon and elsewhere. The fourth in the series is in the works now.

LAURA BELGRAVE:
Changing the Dynamics of Small Town Cops With One Experienced Detective

With regularity I’m asked why I set my Claudia Hershey police procedurals in a small Florida town and then thrust a big-city veteran homicide detective from Cleveland, Ohio into the tiny police department there. It’s always been an easy answer for me: Small towns harbor secrets.

Secondary to that? As much as I enjoy mysteries set in the glittery coastal areas of Florida—or other large, high-profile cities throughout the United States—after a while those novels have a sameness and predictability to them. Big city cop shops have the resources they need. They generally have well-trained police officers, not to mention protocols and procedures that are actually written down.

I wanted something different. Thus was born the town of Indian Run, a town with some 8,000 residents situated in Central Florida. Indian Run is all about cattle, citrus, fishing lakes, a small community of psychics and mediums, and people suspicious of outsiders. In theory, in Indian Run nothing much happens beyond bar fights. Of course, nothing stands still forever, so through the course of my mysteries—In The Spirit of Murder, Quietly Dead and Deadly Associations—the town itself goes through some changes as developers discover a cheaper place to build communities that appeal to retirees willing to forfeit coastal breezes for pleasant, but low-cost homes. The town council likes that, too.

With the arrival of Detective Lieutenant Claudia Hershey, a hire grudgingly made by the town’s cantankerous police chief to appease increasingly progressive people on the town’s council, other kinds of changes occur in Indian Run. The changes weren’t what the chief expected. But see, the thing about Hershey? She understands why everything that might appear to be an accidental death actually isn’t. She actually recognizes poor police procedure. She quickly learns that a small town is the perfect place to conceal crime and get away with it. That’s because in Indian Run no one looks too hard. So yeah, her arrival changes things up and none of it makes the 6-foot detective popular in a “good old boy” police department.

On the other hand, the blunt-speaking Hershey didn’t move to Indian Run to be popular. She moved there to get away from an endless flow of murders and the subsequent brutal work hours that kept her from being the mother she wanted to be to her 14-year-old daughter. Leaving, she thought, was worth a fat pay cut. But what she brought to Indian Run in investigative experience, she lacked in understanding the criminal kinship small towns actually do share in common with big cities. Murder, in the end, is still murder, even if it might look different without the bright lights, huge population and always-on atmosphere of a big city.

Hershey also failed to imagine that horseflies big enough to saddle and ride, alligators, and the persistent scent of cattle would be a regular part of her life. She certainly didn’t anticipate that hand-to-hand combat in that kind of environment would occur. Her bad.

Now don’t think for a minute that all small towns are made up. In fact, in Florida, there exists a Panhandle city called Carrabelle. It’s a 1,300-resident fishing community with a police chief, deputy chief, three officers and two part-time officers. It didn’t start with a police station. It started with an enclosed phone affixed to the side of a building. That’s where officers received and made calls. Much to the consternation of the city fathers, cunning visitors routinely used it to make long-distance phone calls, so the police “department” was eventually turned into a phone booth. That didn’t help much and today, the city has a small building. (But if no one answers the non-emergency phone number, you’re to call the Franklin County Sheriff’s Department so you can leave a message.)

No, Carrabelle doesn’t have the intriguing crimes that Claudia faces. Nor, to my knowledge, has any officer ever been stuck with the chief’s nephew Booey for a pretend internship because, well, the chief has to pay off his brother and this is one way to make the debt good. Then again, because readers do influence writers, young Booey makes a return visit in Deadly Associations, third in the series, because readers wanted more of the excitable young man with the fire-red hair. Indeed, with Booey on stage you might make the mistake that the Claudia Hershey mystery novels are cozies. They most decidedly are not.

For me, no matter where they occur, the best mysteries are driven by rich characters who stay true to their nature, solid pacing and obsessively-researched plots that don’t duplicate what already has been written. Small towns with their quirky natures make that possible. Truth be told? For me, small towns make it too compelling not to use them as a setting.

As for Claudia, she is this:

Tall and thin and sharp of elbow, Claudia was neither beautiful nor plain. Her face mercifully lacked the sharp geometry of her body, but it was dwarfed by oversized glasses that gave her eyes an unsettling depth and authority. Those who met her stare pulled away first, shrinking from the penetrating orbs that were sea green in color, the right marginally smaller than the left.

Indeed, back in the days when Claudia’s daughter Robin still spoke to her in a civil manner, she liked to joke that people could walk on her mother’s line of vision.

Put that kind of person into a small town police department? You don’t get a slacker. You get someone who won’t look the other way because it’s easier. Claudia brings her best game, the only one she knows how to bring as a top-drawer investigator. And one day, the police chief might actually like her. In fact, it would appear he’s grudgingly beginning to do that—or at least admire her.
Posted by Janet Rudolph at 11:46 AM


What an interesting writer with a justifiably good premise for her series of stories. I wish Laura well.
I used to work at Scotland Yard so understand how metropolitan police services view and deal with crime. I can well imagine that rural crime may well be dealt with in a more eccentric and locally finessed way. What an intriguing and dynamic situation to have the two approaches stimulating each other resulting, hopefully, in plenty of heat and light on the way to solving crime and bringing about justice.
If the extract of her book is representative of the whole, the reader is in for a real treat. I wish Laura Belgrave much well-deserved success