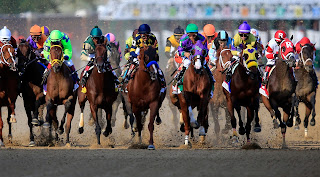 The Kentucky Derby is back this Saturday to a live 50% capacity audience. The Derby will also be live-streamed. There will be masked people cheering on the horses, women in big hats, and Bourbon tipplers all around as they celebrate. I've dusted off last year's list of Kentucky Derby mysteries and added a few more titles. And, you can also read horse-racing mysteries to celebrate the Derby --  or you can watch the movie The Kentucky Derby (1922). It's full of grit and crime. Have a piece of Derby Pie (recipes on DyingforChocolate.com), filled with chocolate, bourbon and nuts. Or make some Mint Julep Truffles or Kentucky Derby Bourbon Truffles.

Kentucky Derby Short Stories
"The Gift" by Dick Francis is set at the Kentucky Derby. It is in the collection Field of Thirteen. "The Gift" first appeared as "A Day of Wine and Roses" in Sports Illustrated, 1973.
Derby Rotten Scoundrels: A Silver Dagger Anthology, edited by Jeffrey Marks
Low Down and Derby, a collection of fast paced mystery stories set around the Kentucky Derby, by fifteen authors from the Ohio River Valley Chapter of Sisters in Crime, edited by Abigail Jones.
Murder at the Races, a collection of Short Stories including "A Derby Horse," edited by Peter Haining.

Children's Mysteries
The Mystery at the Kentucky Derby by Carole Marsh

Great Horse Racing Mysteries: Tales from the Track by John McEvoy
Dancer's Image: The Forgotten Story of the 1968 Kentucky Derby (and 5 other non-fiction books about Thoroughbread racing and equine law) by Milton Toby

And there once was a thorough-bred named Mystery Novel. He did not win the Kentucky Derby.

Authors who Write Horse Mysteries
(not necesssarily about the Kentucky Derby)

Other Horse Mystery Short Stories
Murder at the Racetrack, edited by Otto Penzler
Field of Thirteen by Dick Francis
Posted by Janet Rudolph at 8:42 AM