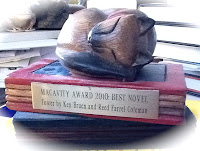 The Macavity Awards are nominated and voted on by members of Mystery Readers International.  Mystery Readers Journal is MRI's publication. The winners will be announced at Bouchercon, the World Mystery Convention. Bouchercon will be held in St. Louis in September. This award is named for the "mystery cat" of T.S. Eliot (Old Possum's Book of Practical Cats).

Best Mystery Short Story
“The Scent of Lilacs” by Doug Allyn (EQMM)
“Swing Shift” by Dana Cameron in Crimes by Moonlight: Mysteries from the Dark Side (Berkley)
“Devil’s Pocket” by Keith Gilman in Philadelphia Noir (Akashic)
“The Gods for Vengeance Cry” by Richard Helms (EQMM)
“Bookworm” by G.M. Malliet in Chesapeake Crimes: They Had It Comin’ (Wildside)

Thanks for posting the winners. I'll look for their books. But would it be nice if a few books published by a number of the outstanding independent presses were represented on the list?

James Lee Burke should win every award for any book he writes..
his books sing.

A great collection of books and authors!

Wildside Press is a small press.

Tim Halliinan has long deserved more recognition than he gets. THE QUEEN OF PATPONG, in part, reads like a memoir, no small task when a man is writing the life of a woman.

Simon Lelic's A THOUSAND CUTS is a stunning book. Those who do not have children from pre-school to college can not fully appreciate the culture of bullying that has appeared in the last few years.

Akashic is a small press, too.

Pleased to see Burke on the list - he's been operating at such a high level for so very long that it seems that many awards just overlook him now. THE GLASS RAINBOW was, IMO, one of the very best crime novels of 2010, if not the best, so glad to see the Macavity voters recognising it.

I was disappointed with Deon Meyer`s 13 Hours , although good I think all his previous books were better
Doron Locketz
Bookdealers
Johannesburg
South Africa