Peter Bartram’s career as a journalist saw him covering stories from places as varied as 700 feet down a coal mine to inside Buckingham Palace before he turned to crime writing. He’s interviewed people from cabinet ministers to crooks. (The crooks give the more honest answers, he says.) Before writing his first murder mystery, he authored 21 non-fiction books in genres including biography, current affairs and “how-to.” Peter's first mystery is Headline Murder.

I first had the idea of writing a series of mysteries based on the adventures of a newspaper crime reporter years ago shortly after I’d begun my first job in journalism. It happened like this. As the most junior reporter on the paper, I’d been given the job of writing obituaries. Dead boring? Yes, I had to put up with that jibe from colleagues a dozen times a day. “Is the body copy ready?” was another one.

Anyway, one day the court reporter was off sick and I had to fill in. That day, one of the cases involved a tough-looking defendant who was found guilty and fined. Later, he accosted me outside the court and made it clear that if I wrote anything about the case, he had a crew that would make me regret every word.

Not quite the Sopranos. But not the castrati, either. 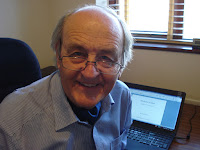 After a few weeks of writing about the dead, reporting on the living looked like it was going to be a tad more interesting. And if this was a typical day in the life of a crime reporter - it wasn’t - it could provide good material for a novel. (Incidentally, for the record, we ran the story on the front page and I lived to tell, in fact, many more tales.)

Anyway, a lifetime of writing for newspapers and magazines later, I came back to the idea of authoring a series of crime mysteries. At first, I wondered whether a career as a journalist would be a help or a hindrance. But when I came to look at the biographies of crime writers, I was surprised how many - most famously, Edgar Wallace - had been journalists before they turned to crime writing.

And when I came to think about it a bit more, I realised that wasn’t surprising. After all, there are remarkable similarities between the kind of mind you need for crime writing and for newspaper reporting. A “low-bred curiosity” is what one newspaper colleague called it.

When I trained as a journalist, practically the first thing I was taught was to ask what Rudyard Kipling called the “six honest serving-men” questions - what, why, when, how, where, who? And when I came to write Headline Murder I found I had to ask exactly the same questions when I constructed the plot. What was the crime? When and where was it committed? How was it done? Why was it done? And, most important of all, whodunit?

Whether reporter or crime writer, the questions are the same but the way you find the answers is different. As a reporter, you seek them in the facts. As a crime writer, in your imagination. Which may be stimulated by your experience. That’s certainly been the case with me.

Mystery readers will know all about “police procedurals” - where the thrill comes from watching a cop solve the case step-by-step. I’d call Headline Murder a “newspaper procedural” because the main aim of the hero - Colin Crampton, the paper’s crime correspondent - is to get a “scoop” on who’s revealed as the murderer. So he has to be at least one step ahead of rival reporters. That creates a new source of tension in the story.

Now the book has hit the stores, I’ve found it interesting to look back and pick out those incidents that were inspired by my own career and those that were pure imagination. But, then, Crampton is part avenging angel, part rogue. He knows every newspaper scam in the book - and is not afraid to pull them. So am I going to reveal which incidents are my own? As this post is being published in America, I think I better claim the Fifth!

It's August 1962, and Colin Crampton, the Brighton Evening Chronicle's crime reporter, is desperate for a front-page story. But it's the silly season for news – and the only tip-off Crampton has is about the disappearance of the seafront's crazy-golf proprietor, Arnold Trumper. Crampton thinks the story is about as useful as a set of concrete water-wings. But when he learns that Trumper's vanishing act is linked to an unsolved murder, he scents a front-page scoop. Powerful people are determined Crampton must not discover the truth. But he is quite prepared to use every newspaper scam in the book to land his exclusive. The trouble is it's his girlfriend, feisty Australian Shirley Goldsmith, who too often ends up on the sticky end when a scam backfires. Crampton has to overcome dangers they never mentioned at journalism school before he writes his story. Headline Murder will keep you guessing – and smiling – right to the last page.

“Superbly crafted and breezy as a stroll along the pier, this Brighton-based murder mystery is a delight. Headline Murder is the real deal, giving a wonderful insight into local journalism and capturing the swinging sixties to perfection. Bring on the next Crampton Chronicle.” - Peter Lovesey, former chairman of the Crime Writer’s Association and multi-award winning crime mystery writer.
Posted by Janet Rudolph at 8:02 AM

Really enjoyed this! My late husband was a journalist and newspaper publisher.....he would agree with every word and cheer you on!