The Curious Case of Bog Bodies 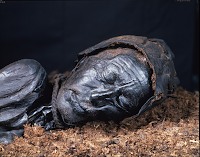 I first heard about bog bodies when I was a graduate student studying Celtic Art. Bog bodies are a great source of historical, scientific, anthropological, and art knowledge. Since first studying bogs and what they can show us,  I've always told my partners that when I die, I want to be thrown into a peat bog. Not an easy task here in California that is devoid of an ample number of peat bogs. Alaska has many, but then one would have to cross Canada, another country, with a dead body in tow. Law enforcement might frown on this. I guess there might be a lot of bogs in Canada, but I'm a U.S. citizen. At this stage in my life, I'll have to forgo this interesting internment...and let's face it, of what value to future academics and scientists would I be, anyway? Perhaps this is too gruesome a subject for some, but not for me. I read a lot of mysteries and true crime.

As a crime fiction reader, I was excited to read this article on Nautilis, "The Curious Case of the Bog Bodies" by Kristen C. French. Ms French discusses a special breed of forensic analysis of the hundreds of human corpses, dating back to 8000 BC, found in European bogs. They are all exquisitely preserved, as they would be, from the peat. What's interesting is that so many of them have been violently killed and deliberately placed in bogs. "The bogs are curious tombs, likely harboring homicide victims, both honored and disgraced." Hangings, ritual murders, and just plain violent crime make up a goodly number of these bog bodies, and so it's of interest in what we, as students of crime, can learn. The photo above is of Tollund Man. There's a leather noose around his neck, and he most likely died by hanging. However, he was carefully placed in a fetal position, with eyes and mouth closed. Oh...the story behind this....

If you like mysteries, you'll find this article fascinating. Ms French elucidates 5 of the most noteworthy--and cringe-worthy-- cases.