An Award by Any Other Name: Guest post by Lori Rader-Day 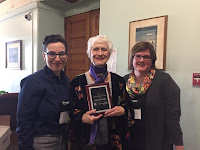 Lori Rader-Day’s debut mystery, The Black Hour, won the 2015 Anthony Award for Best First Novel and was a finalist for the 2015 Mary Higgins Clark Award. Her second novel, Little Pretty Things, won the 2016 Mary Higgins Clark Award and was a nominee for the Anthony Award for Best Paperback Original. Little Pretty Things was named a 2015 “most arresting crime novel” by Kirkus Reviews and one of the top ten crime novels of the year by Booklist. Her third novel, The Day I Died, was just released by Harper Collins William Morrow on April 11, 2017. She lives in Chicago.

Lori Rader-Day:
An Award by Any Other Name

When Dana Kaye and I decided to start a new crime fiction conference in the crime-fiction-conference-free zone of Chicago (after Love Is Murder sadly folded in 2016), we had a plan. One track. One room. Lots of great Chicago and Midwestern authors. Stir.

Along the way, though, we came up with one way we would be different than our predecessor. Our Chicago-based mystery conference would be home to a new award, given to honor a life’s work of Chicago and Midwestern mystery writing.

We named it the Sara Paretsky Award.

Of course we did.

Admit it. When I say “contemporary Chicago mystery,” Sara comes to mind. Sara Paretsky is the voice of our city and region (and, often, in ways far beyond mystery fiction, of our national conscience). Lucky for many a female crime writer, she used her voice to speak for our gender as the founding mother of Sisters in Crime, now an international organization with approximately 3,800 members, celebrating its 30th anniversary this year. We all have a voice, thanks to Sara.

So in its first year, upon whom could we bestow the honor of the Paretsky Award? None other than Sara Paretsky, of course.

Sara was a headliner of the inaugural Murder and Mayhem in Chicago, along with Minnesota’s William Kent Krueger, so she was on hand to learn along with the crowd that the award had been named in her honor and then to graciously receive it. It is among one of the most special moments of my professional life to be able to announce the news with Dana, and to watch Sara’s reaction to the standing ovation she got from our two hundred attendees.

Of course the next question is: who might be the next recipient of such an award? Dana and I are working on ideas that help bring readers into the process and when we have the details worked out, we’ll announce it widely. Because you have ideas, I’m sure, the readers of Mystery Fanfare, which does such a wonderful job of announcing award nominees and winners all mystery-award-year long.

It is one of the joys of the mystery community to celebrate our exemplary members. Murder and Mayhem in Chicago is pleased to join in. MMC is over until spring 2018, but if you’re interested in Midwestern mayhem, check out our partner-in-crime conference, Murder and Mayhem in Milwaukee in November.

The Paretsky Award awaits another winner. Who else came to mind when I said “contemporary Chicago mystery”?

Photo Credit: Julia Borcherts
Posted by Janet Rudolph at 7:48 AM