The Arthur Lyons Film Noir Festival returns for its 18th iteration to sunny Palm Springs, May 11-14, at the Camelot Theatres.

The festival kicks off with a restored print of Hollow Triumph (1948) with special guest, actress-filmmaker Monika Henried, daughter of star Paul Henried. Richard Duryea will also be in attendance for Roy William Neill's Black Angel (1946), which features a rare sympathetic role for his father Dan Duryea. Other guests include Sara Karloff, daughter of Boris, for a screening of the Val Lewton production The Body Snatcher (1945) directed by Robert Wise, and actor Andy Robinson from 1973's Charley Varrick, Don Siegel's classic heist film. As in previous years at the festival, the majority of the films are presented as 35mm prints. Producer and programmer Alan K. Rode and co-presenters Eddie Muller and Foster Hirsch will be introducing the films.

The festival is executive produced by the Palm Springs Cultural Center.
View the entire film and guest schedule, then purchase tickets and passes here! 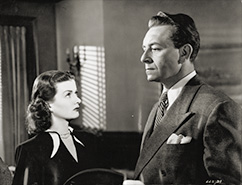 Posted by Janet Rudolph at 8:38 AM