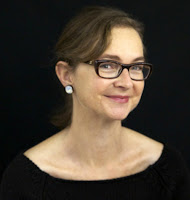 M.L. Longworth has lived in Aix-en-Provence since 1997. She has written about the region for The Washington Post, The Times (U.K.), The Independent (U.K.), and Bon Appétit Magazine. She is the author of a bilingual collection of essays, Une Américaine en Provence published by La Martinière in 2004. She divides her time between Aix and Paris, where she teaches writing at NYU’s Paris campus. THE CURSE OF LA FONTAINE: A Verlaque and Bonnet Mystery (A Penguin Mystery Original; April 4, 2017) by M.L. Longworth, is the sixth book in the Verlaque and Bonnet mystery series set in Aix-en-Provence. In this latest installment, newlywed investigators Antoine Verlaque and Marine Bonnet contend with their most sinister challenge yet: a centuries-old curse.

When I’m teaching mid-week in Paris, at NYU’s French campus, I’m so busy that by the time I get back home to Provence, late Thursday evening, I tend to forget the date. I know what day it is, but not the date. So this morning, when I switched on my home computer, I noticed with delight that it was March 17th. Saint Patrick’s day. That means tonight we’ll be going to our neighborhood wine bar, located in the next village over, and run by a sommelier/rugbyman named Benoît. A video had circulated around the village of last year’s party, which we didn’t attend, showing Benoît dancing a jig on the bar. Ben hires a local musician, Yannis, for the evening who sings in Gaelic but is thoroughly French. In fact, Yannis grew up in our village, the son of farmers. But he thinks he’s Irish. He really does.

When we moved to France in 1997, I never would have believed that we’d still be here, to stay, twenty years later. Or that I would write a mystery series set in Aix-en-Provence. Nor would I have believed that by 2015 or thereabouts France would witness a renaissance in craft beer making. I would have laughed if someone had told me that the port city of Toulon, home to a huge naval base, economically deprived and little visited, would produce one of my favorite ambers, made by young friendly hipsters (their company is “Bière de la Rade” and their slogan, cleverly, is Pimp my Rade). But today, even the village one hill over, here in Provence where chilled rosé wine is king, has a one-man brewery. Food and wine feature prominently in my books, and so it now seems that my judge, Antoine Verlaque, will need to be sipping craft beers along with his beloved red Burgundies.

I can get dispirited over the increasing globalization in France, especially in Paris—restaurants advertising, in English, brunch, hamburgers, and filter coffee—but the beer resurgence has me smitten. Perhaps it’s because the beer makers I’ve spoken with are passionate about what they’re doing. They’re not just trying to make a quick buck. And perhaps it’s thanks to people like Hervé Marziou. Last year, along with my cigar club in Aix-en-Provence, we were treated to a beer tasting by Hervé, France’s undisputed expert, lovingly nicknamed “Papillon” as he never leaves the house without a bowtie. A few weeks ago I opened the pages of one of France’s national newspapers and there was a photograph of Hervé, giving a beer tasting to Le Président de la Republique, François Hollande.

In early March I took a small group of NYU students to the annual agriculture fair in Paris, hoping to show them that what they eat in Parisian restaurants starts on the farm, in the earth, on trees, and vines. The students were excited to see the various races of sheep and were awed by the size of the cows, especially the dark red Salers and golden Charollais (Salers cheese, hard with a nutty-flavor, is wonderful; and, if you’ve ever been to Burgundy and eaten a tender steak, it was a Charollais). We soon had to leave that vast hall as Emmanuel Macron, a presidential candidate in this year’s election, came through, followed by dozens of journalists and cameramen, and even more fans (although one person did throw an egg at Macron, obviously not a fan). The students knew they had just witnessed a small glimpse of contemporary French history, and we moved on to the next hall, where the food and drink of each region of France was featured under one enormous roof. I led my ten undergraduates through the throngs of people, in search of free cheese samples, when we passed by a VIP room for France’s beer makers. And whom should I see? Actually, I saw his bright blue bowtie first.

Hervé saw us through the swinging doors’ round windows and came running out, giving me the traditional French bise; I then introduced him to the students. He looked at his watch and said regrettably that we could not go into the VIP room, but that he had twenty-five minutes available before Emmanuel Macron’s visit. Would we like a beer tasting? He asked. I answered Yes! (becoming a rock star in the eyes of the students) and Hervé took us to the stand of a craft brewery located in the Vendée on France’s Atlantic coast. We met the master brewer and Hervé explained how to taste beers (basically, much like wine; you look at the beer, smell it, then taste it). He spent exactly twenty-five minutes with us, as promised. One of the students, a freshman from Northern California, thanked Hervé and announced, “Now, when I graduate, I know what I’m going to do. I’m going to make beer!”

Postscript: Ben did not dance on the tables last night, although he may have after we left. The band brought the house down with a rhythmic and emotional version of The Pogues’ Dirty Old Town. On our way out my husband ran into a former work colleague. He chatted with her, asking what she was doing with herself since leaving their company. “I have embarked upon a new project,” she said, beaming. “I’ve started my own beer company.”
Posted by Janet Rudolph at 7:23 AM