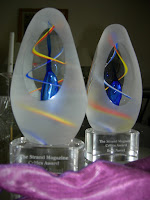 The Strand Critics Awards, recognizing excellence in the field of mystery fiction, were judged by a select group of book critics and journalists. Congratulations to All!

Clive Cussler was honored with the Lifetime Achievement Award.

The awards will be presented at an invitation-only cocktail party in New York City, hosted by The Strand on July 12, 2017.

Posted by Janet Rudolph at 9:06 AM